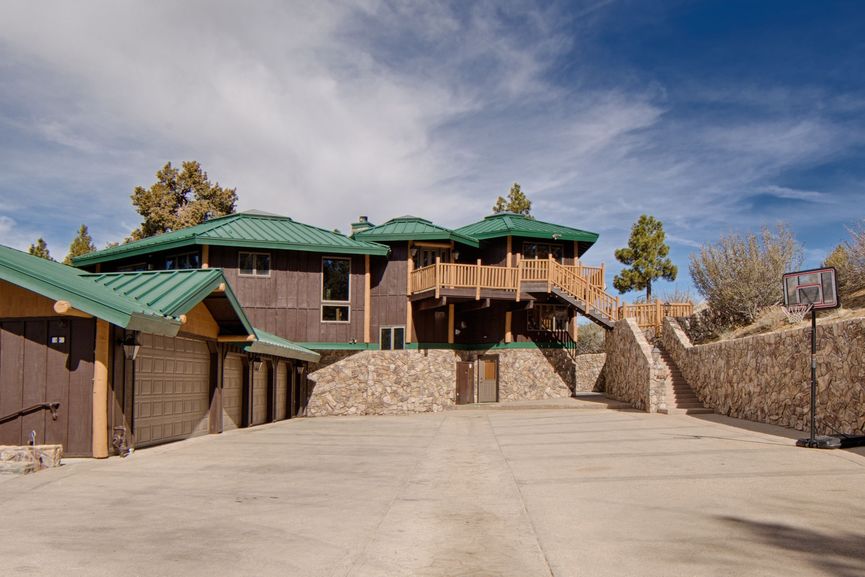 The sleepy resort town of Big Bear, CA, is getting a wake-up call—thanks to an anticipated influx of cash. Area property values are looking up for the first time in quite a while.

The owners of Mammoth Mountain Ski Area, a popular resort near Mammoth Lakes, recently purchased Bear Mountain and Snow Summit, two resorts in the Big Bear area. The Los Angeles Times believes the owners are going to put up luxury hotels and draw cash-flush clientele with resorts only a couple of hours from Los Angeles.

So if you’re looking for an investment opportunity, this seven-bedroom Frank Lloyd Wright–inspired house might be worth a look. Located on 40 acres of mountain land, the 5,500-square-foot home will be prime property if Big Bear awakes from its slumber.

“I can’t tell you if it’s the [Mammoth] purchase or the market, because the [housing] market is hot right now, but in 2013, there were zero $2 million-and-above sales in Big Bear. In 2014 there were six, one over $3 million,” listing agent Grant Gerhart said. He hadn’t seen a home cross the $3 million threshold in Big Bear since right before the housing crash.

“I had a listing sell for over a million after being [on the market] for three years,” Gerhart said. “It’s the busiest summer I’ve ever had.”

This home is particularly interesting because it has commercial potential—the place sleeps 34 (!) people thanks to extensive bunk beds. The acreage makes it an excellent spot for off-roading, mountain-biking, running, hiking, and disc golf (there’s a course on the grounds). It’s been rented out as a retreat in recent years.

Custom-built by local architects William H. Yaeger and his father in 1999, this home follows Wright’s architectural principles. It has an organic feel, with the structure designed to complement the land around it.

In another nod to Wright, the home’s materials also mirror the landscape. Bear Mountain’s forest plays a starring role in the house. Locally sourced aspen logs were used for the smooth trim and furniture. The banisters were designed to resemble tree branches. One chandelier, fashioned from wood, is shaped like antlers.

In fact, the whole structure appears to be supported by and built around a branchless tree sprouting up in the middle of the house. It’s not, of course—Gerhart said it’s a hollowed-out tree fitted with a steel rod.

Area river stones are found in the flooring, walls, and fireplaces. The mantel in the great room has etchings of mountain fauna, including eagles and bears.

Interestingly, the master living room, kitchen, and master bedroom are upstairs while the guest quarters are all downstairs.

“The house is flipped,” Gerhart said. “It’s a view home.”

The home, which can apparently house a few dozen guests, has two kitchens, a dumbwaiter (naturally!), two living rooms, two washers and dryers, and a 14-person hot tub.

That giant hot tub is accessed by a gigantic deck that curls around the first and second floors. Gerhart estimates that the square footage of the deck is “more than most people’s homes.”

Gerhart said the current owners tried unsuccessfully to get the property zoned for community housing. With the economic climate improving around the mountain, the owners believe now is a good time to sell, he added.

While the resorts have yet to be built, the community is ready for the change. An October 2014 op-ed in Big Bear Grizzly stated, “The resorts can use a face-lift, new amenities, and yes, maybe even an upscale hotel or restaurant.”

Gerhart said the resorts may still be “a couple of years” away from being finished, but the market already appears to be buzzing.